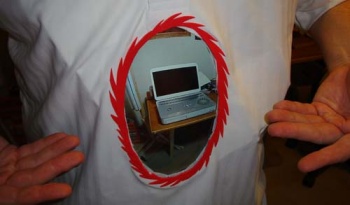 When people say that they can see right through Ben Heck, they might actually be being literal.

Can you make a portal through a person? There weren't exactly a lot of test subjects in the Aperture labs, and let's face it, you're not about to turn the portal gun on yourself to satisfy your curiosity. Without the opportunity to actually conduct the experiment, you might just have to settle for shirt that replicates the possible result.

Inspired by the sublime first person puzzle game Portal, console modder and electronics whiz Ben Heck has created what he calls "probably the geekiest Halloween costume you could make." Heck has taken a couple of white shirts, a camera, an LCD screen and a battery pack, and made a garment that looks like you could stick your hand right through it. The concept is pretty simple: the camera sticks out of the back of the shirt and displays whatever it sees on the LCD screen in the front. Heck estimates that the batteries will last for around three hours, which is plenty of time to amaze people at a Halloween party and scare neighborhood kids later in the year if you get bored.

Heck's previous projects have included a custom built, Bill Paxton themed pinball table, a number of portable, laptop-style, consoles, and a lot of one handed controllers for disabled gamers. Heck is described as a "hobbyist," so presumably he has a regular job as well, but I have no idea where he finds the time.

If you're interested in seeing how Heck put the shirt together, you can watch a video of the construction here. There's also a competition you can enter to win the shirt, signed by Heck himself, which you can enter here, although it does require signing up for a forum.

High Definition: Why The Great Pumpkin Is Still The Best Halloween Special Ever MovieBob 15 Comments