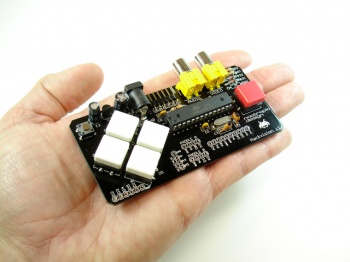 With a little bit of technical knowhow and the right tools, you can turn a fistful of electronic components into a fully functioning, albeit simple, console.

Most people who play a lot of videogames will at some point have entertained the idea of making their own game, even if only for a split second. The Hackvision from nootropic design not only gives you that opportunity, but goes one better and lets you build the equipment yourself.

There's a couple of provisos though, firstly the games can't be very complicated - around the same level of complexity as Pong or Space Invaders, both of which come pre-loaded on the device - and you're going to need some soldering skills to put your console together. The Hackvision comes as a kit, and you'll need to solder each component into place, although if you're not feeling up to it, you can pay a ten-dollar premium to have it assembled for you. The Hackvision has a built in controller, but can also accommodate a Super Nintendo controller, a Wii nunchuck, or a homemade paddle controller with a little bit more tinkering.

While there are certainly easier and cheaper ways to play Pong or Space Invaders, there's a certain sense of satisfaction in knowing that you're playing it on a device you built yourself. If you fancy yourself as a something of an electronics buff, you can pick up a Hacktronic kit from nootropic's online store for just under forty bucks, or pick up an assembled one for just under fifty. The nootropic website has an extensive guide on how to put the thing together, as well as some helpful tips about how to start making new games for it.

Not That There's Anything Wrong With That Robert Yang 132 Comments