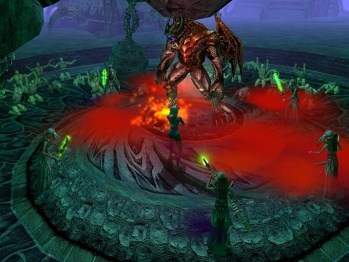 The Neverwinter Nights community is still going strong, and now it'll be able to go even stronger because of a re-release on Good Old Games.

BioWare's Neverwinter Nights never really died, but Good Old Games is re-keeping the game alive again, or something, with the announcement that it's now available for download on the service. For $9.99, purchasers get the Neverwinter Nights: Diamond Edition which features 2.1GB of RPG goodness that never has to end if you don't want it to.

Neverwinter Nights was BioWare's Dungeons & Dragons: Forgotten Realms effort that came after the successful Baldur's Gate. BioWare gave the license 3D graphics this time and included a revolutionary set of mod tools that enabled users to create their own CRPG Dungeons & Dragons multiplayer experiences supporting up to 96 individuals. Some top creators even had their adventures sold by BioWare on its official website.

The Diamond Edition includes three expansion packs: Shadows of Undrentide, Hordes of the Underdark, and Kingmaker. These add new classes, monsters, spells, feats, and toolset features, in addition to expanding the original game's level cap and giving players many new adventures to embark upon. In my personal opinion, Neverwinter Nights takes a step back from Baldur's Gate by only allowing a party of two in single-player, so the adventure can get lonely at times, but there's still a lot of good content here for the price. It's a BioWare RPG, and they aren't known for being of poor quality.