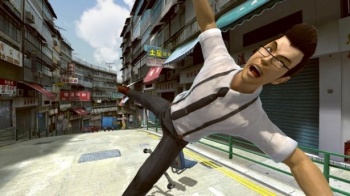 Sony is selling itself short by using Move as a replacement for a regular controller, says Microsoft's interactive entertainment boss Aaron Greenberg.

Greenberg has praised Sony's new motion controller the PlayStation Move, calling it a "great product." He thought that Sony wasn't ambitious enough with its strategy for the device, however, and was content to target it at its existing audience.

Sony was presenting Move as a replacement for a traditional controller, Greenberg said, making a big deal about how gamers could use it to play games like SOCOM 4. He thought that there would be users that would enjoy playing games that way, but said that Microsoft was taking a different approach. Rather than try and shoehorn its motion controller, Kinect, into games where it wouldn't necessarily fit, he said, Microsoft was looking to build games that had the device in mind from the outset. He reiterated that Kinect was a big deal for Microsoft, and said that the resources that the company had invested into it were on a par with the investment it had made in Xbox Live.

It's certainly true that Sony has been a lot more cautious with Move than Microsoft has been with Kinect, but I don't think it's accurate to say that it's only targeting its existing install base. Sony has definitely tried to present Move as something that core gamers would enjoy, but that's not been to the exclusion of a broader, more casual audience.