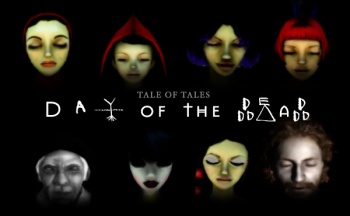 Tale of Tales is holding a "pay what you want" sale for its Day of the Dead bundle, a three-game set featuring The Graveyard, The Path and Fatale.

Halloween is coming, and what better way to celebrate than with some creepy, offbeat gaming? The Day of the Dead bundle collects three Tale of Tales games together into one, but these aren't your everyday blockbuster releases: The Graveyard is closer to interactive art than an actual game, while Fatale puts players in the role of John the Baptist on his final night. But our own Susan Arendt described The Path, Tale of Tales' most successful game, as "haunting, lovely, and genuinely unnerving," noting that it is "well worth the $10 asking price." And now you can snag all three for as little as three bucks.

"On the eve of All Saints' Day and All Souls' Day, humans try their best to forget their fear of death. But why? Death is a fascinating phenomenon that we have explored in the three videogames offered in the Day of the Dead bundle," said Michael Samyn of Tale of Tales. "We hope our games allow players a moment of silent contemplation, away from the cheap scares and the rubber monsters. We all know people who have died. We will all die ourselves. This is the time of year to remember that. As the days get shorter, and nature around us withers, let's be quiet for a little while, and connect to the darkness and the cold. Maybe we will find it's not so frightening after all."

Until November 2, gamers can pay whatever they want for the Day of the Dead bundle, with a minimum $3 charge to cover transaction fees. All proceeds from the sale will go toward the ongoing development of Tale of Tales' latest project, The Book of 8. TO learn more, check out taleoftales.com/dod.