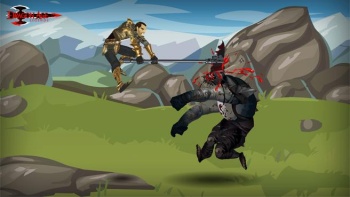 BioWare is busting into Facebook with Dragon Age Legends, a new casual, social game that will offer exclusive unlockable items for use in Dragon Age 2.

What to do until Dragon Age 2? Maybe Facebook will be able to help you through the dry spell with Dragon Age Legends, a new game based on BioWare's hit RPG series that combines "engaging tactical combat" with the social gaming environment of Facebook. The game takes places in the Free March city of Kaiten, where the son of Viscount Ravi is beset by "mysterious circumstances." As one of the Viscount's most trusted allies, players will tackle demons and Darkspawn side-by-side with their Facebook friends as they embark upon story-based quests to earn riches, grow their kingdoms and unlock unique, exclusive items that can be used in the upcoming Dragon Age 2.

"Our goal is to change the perception of social network games and attract new players to the Facebook platform by raising the quality bar," said Mark Spenner, general manager of EA 2D, the studio making the game. "Dragon Age Legends will deliver a deep, sophisticated experience, and we will continue to delight gamers by adding new features and content far into the future."

It sounds good, but are Facebook gamers really after a "deep, sophisticated experience?" For that matter, are Dragon Age fans going to take a Facebook version of the game seriously? Legends will no doubt have value as a promotional tool - exclusive unlockables will have that effect - but it may be a tougher sell as a legitimate, stand-alone game.

Dragon Age Legends is scheduled to launch in February 2011 but beta signups are being taken now at dragonagelegends.com. Dragon Age 2 comes out on March 8, 2011, for the PC, Xbox 360 and PlayStation 3.