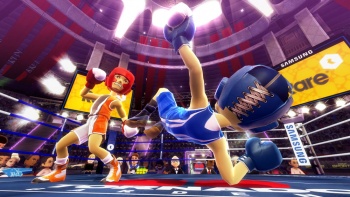 Microsoft now thinks its previous forecast of 3 million Kinect sales for this year is way too low.

When Microsoft announced that it expected to sell 3 million Kinect devices this holiday season, making it what the company called the "biggest platform launch ever," I was initially skeptical. Was the Kinect really connecting with enough people to be worth the $150 cost of entry? Apparently so, as Microsoft has recently upped its sales forecast by a couple million units.

President of Microsoft Interactive Entertainment Business Don Mattrick told Bloomberg this week that the company now expects to sell 5 million Kinect cameras for the fiscal quarter, which would be the biggest launch in Xbox history. Microsoft is making a profit off of every device sold, so along with the sales of Kinect games the conglomerate is looking to make it huge in motion gaming this year.

Microsoft is promoting Kinect with the aid of around half-a-billion dollars, and it could be paying off already. The motion gaming device is being featured everywhere from inside Burger King restaurants to Oprah's television show. Microsoft didn't give a reason why it was increasing its forecast by such a large amount, but the Oprah Effect probably didn't hurt.

If there's one thing Microsoft knows how to do, it's spending money on marketing. Kinect will launch on November 4, but don't worry if you can't find one in stores, because with this new forecast one of your friends will probably have it.