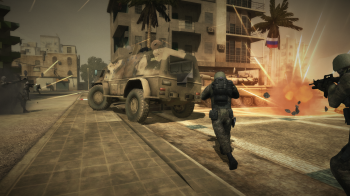 An EA executive said that free-to-play games will seriously disrupt the videogame market in two to five years.

Free-to-play (F2P) games allow you to download and play with limited functionality or gameplay limits such as playing up to certain levels. If you'd like to play all of the game or gain access to certain content such as dungeons or items, then you must pay money. For now, free-to-play games are only found the PC. MMOs are the most popular F2P genre with titles such as Jagex's RuneScape always offered for free and, more recently, many MMOs converting to the F2P model such as Turbine's Lord of the Rings Online. The model works and many MMO companies have reported a huge increase in revenue after switching to teh F2P model. Ben Cousens is the managing director of the free-to-play Easy division at Electronic Arts, who just announced PC shooter Battlefield Play4Free today. He said that not only is the F2P model successful on the PC platform but it will soon threaten the console videogame business.

Cousens believes that consumers will soon be wondering whether it is worth it for them to spend so much money on an expensive console. As F2P games improve in quality and presentation, like Battlefield Play4Free is likely aiming to accomplish this spring, consumers will see the idea of spending hundreds of dollars on gaming equipment and peripherals as somewhat foolish.

EA will have to compete to "grab the TV screen away from the console manufacturers," Cousens said. He looks to platforms such as Apple TV and Google TV as possible ways for F2P games being played on consumers' TVs without the need for a gaming console.

He offered one bit of advice for console makers: make it easier to release games on your platforms. A truly open platform, like the PC is now, will be the one way to insure that the F2P model doesn't pass consoles by. Opening up Xbox Live or the PlayStation Network would drastically change the market and allow publishers to set their own pricing models.

"Anyone who thinks in terms of walled gardens is in trouble," Cousens said.