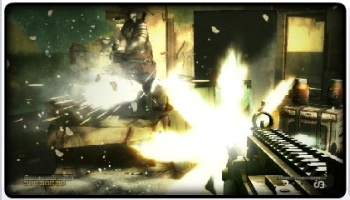 Codemasters CEO Rod Cousens has confirmed that the "outrageous" FPS Bodycount is being delayed and that Adrian Bolton, general manager at the Codemasters Guildford studio, is no longer with the company.

Bolton's sudden departure follows that of former Creative Director Stuart Black, who announced in July that he would be leaving the studio after wrapping up his duties in October, and of former Executive Producer Tom Gillo, who left before Black. Cousens confirmed that the game has now been delayed into "early summer" of next year but added that all would be well, even without Bolton and Black.

"As a consequence of that, have we looked at the studio and how the studio's run? Sure, we look at that. I also think that's normal business," he said. "I don't think it's any more sinister than that. People have a habit of reading into it, and two plus two becomes five, but we plan to publish the game in early summer next year and we're not being any more specific than that because we're not prepared to compromise on the quality."

He did, however, acknowledge that Codemasters wasn't happy with the state of the game at E3 2010. Regarding the departure of Black, he said, "I can give you a fluffy answer and say Stuart's looking for new challenges in life - all the old cliches that get put forward. We're not saying that."

"We weren't satisfied with where [Bodycount] was. We did make changes, and we're making changes because we're not prepared to compromise our DNA. That's the hard facts of life," he continued. "I read all the stuff on Activision and Call of Duty, and the end of the world is nigh, and the lawsuits that are flying around and the shots they're taking in a very public way. If you read that, that's bound to have compromised the game. I will tell you that it will be the best-selling game this year, so I don't think Activision will be particularly troubled by it."

Bodycount is currently in development for the PlayStation 3 and Xbox 360 and is now scheduled, as Cousens said, for release in early summer 2011.