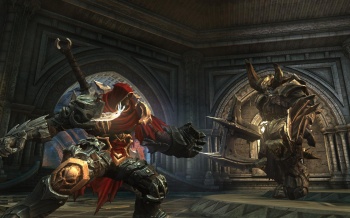 If you want to design games, says THQ's EVP of core games Danny Bilson, you can't be an executive.

According to Bilson, game designers should be allowed to get on with the business of designing games, and not have to keep constantly checking in with management every time they make a change. Speaking at the IGDA Leadership Forum in San Francisco on Friday, Bilson said that the only way to make a good game was by letting designers pursue their visions, and keeping corporate concerns out of the picture as much as possible.

When Bilson joined THQ as creative director, the company had largely built its success on "licensed Game Boy games." His task was to increase the overall quality of THQ's output, and while some might have found the task daunting, Bilson believed he was in a great position to enact real change within the company. "I walked in there," he said. "And I'll be frank, I said 'this is all opportunity. There aren't a lot of creative leaders here, so I can maybe get something done!'"

Bilson said that the only way he knew to make THQ's stock more valuable was to make great games, and the only to do that was by taking a hands-off approach and letting designers work on their ideas. Having to constantly show work to executives was not only costly, he said, but also served to water down a concept.

In Bilson's opinion it's far too common for people who have nothing to do with actually making a game to have an undue amount of control over it. He gave the example of the marketing department essentially setting a game's budget with a forecast, thereby putting limits on what the designers could or couldn't accomplish, and said that he challenged the wisdom of this whenever he could. "I don't think games should be directed from corporate in any way," he concluded. "If you want to design the game, you should get in the studio. You shouldn't be in the corporate headquarters, and you shouldn't be an executive."