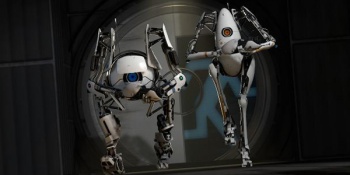 It seems to be an unwritten law these days that every videogame has to have a multiplayer mode, but Johnson, who is currently working on Portal 2, thinks that there will always be room in people's hearts for playing solo.

He said that not everyone wanted to deal with stress of other people intruding into their leisure time, so there would always be an audience for single player games. He also thought that water-cooler moments were a big part of the single player experience. Using the example of the first Half-Life, which he thought was a fairly typical "offline" game, he said that people wanted to be able to talk about the game they were playing, safe in the knowledge that they were experiencing the same thing as those they were talking to.

He didn't think that single player games had to completely eschew online components, however. Giving players who were playing the same section of a game the ability to talk to each other, he said, or to leave each other messages - much in the same way that From Software's Demon's Souls does - would take advantage of a community of players who preferred playing alone, but still wanted to communicate with one another.

Johnson's comments come not long after it came to light that Valve had cut Portal 2's multiplayer mode, after discovering it was far too chaotic to be any fun. Instead, Valve added a co-op mode, which was separate from the single player mode, but much closer to it in terms of gameplay.