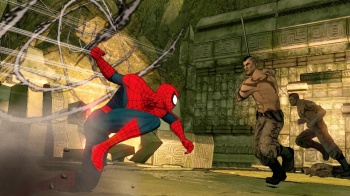 Spider-Man: Shattered Dimensions is coming out on PC soon, but the only place to snag it over Thanksgiving Weekend in North America is Wal-Mart.

Spider-Man: Shattered Dimensions came out for consoles back in September, but PC gamers were left out in the cold at the time. Now, it turns out the PC release is finally coming to stores this month, but the game is going to be a Wal-Mart exclusive over Thanksgiving Weekend here in the States.

The PC version will, presumably, be hitting other stores after the weekend, but no retailers have the game listed on their sites (including Wal-Mart itself). Whether the game will be included in a Black Friday sale remains to be seen.

In the meantime, international release dates have been announced. Australia and Asia are getting the game on November 24th, while European audiences will get to play it starting November 26th.