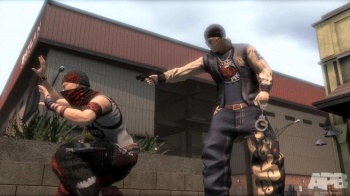 After a meteoric rise and a spectacular fall, it appears that APB has finally found a way to rise from the ashes.

Here's what has happened so far, in case you haven't read the article. Dave Jones founded Realtime Worlds in 2002 and raised a lot of capital for his game concept of an MMO in the vein of GTA. The company released Crackdown to lots of fanfare, and Jones was able to raise even more money. Realtime Worlds grew fat and spent a lot of money making APB: All Points Bulletin, before it launched on June 29th, 2010. Six weeks later, the company was bankrupt and the APB servers shut down in September, with the company selling off its equipment in auction. Rumors persisted that some company, such as Epic, would buy Realtime Worlds and resurrect APB. In what is possibly the best-case-scenario for the defunct MMO, Reloaded Productions, a wholly owned subsidiary of GamersFirst, announced that it has acquired all the rights and assets of APB and that it plans to relaunch it in early 2011 as a free to play game supported by premium accounts and microtransations.

"We have acquired all of the IP rights [of APB]," said Bjorn Book-Larsson, the Chief Technology and Operating Office of GamersFirst and head of all of its game development, when I talked to him about it yesterday. "Our plan is to relaunch the game as a free to play game as opposed to a retail game." The new title of the game will be APB: Reloaded.

"From our point of view, there was some really cool stuff that was built into APB, some really unique features like the customization functions for characters, guns and vehicles, sound customization," Book-Larsson said. "We think of this as a really great starting platform for evolution of the game into a free to play, community-driven game."

It may not seem like a lot of work to take a functioning MMO and adapt it to free to play, but GamersFirst is taking this seriously. "There's obviously a lot of stuff to do," he said. "We're thinking that [the relaunch] will happen in the first half of 2011."

The glaring problems that many players complained about in APB will be ironed out. "The initial version will probably be a modest update from what the game originally had. The goal is to focus on fixing the balancing and the monetization problems that the game had," Book-Larsson said.

He did express sympathy for the team at Realtime Worlds in trying to make APB work. "The way that they had set up their expectations made it a very tough thing for them to try to recover at retail. This was a hard game for them to have made successful in retail mode," he said.

Book-Larsson knows what he's talking about as GamersFirst is a company that specializes in taking MMOs from different markets and re-purposing them as free to play. It's a business model that has worked for Asian games like Sword 2 and 9 Dragons, as well as the shooter War Rock, which bears similarities to APB.

"GamersFirst has been around for about 7 years," Book-Larsson explained. "We've been taking games from Asia, primarily Korea, and converting them into Western markets by localizing and translating them, and making our own content for them. Our publishing model is the complete opposite of retail; whereas retail games expect to make back most of their money in the first 30 days, we expect that it will take six to 12 months to build up a game.

"We expect the same thing to happen for APB," he said.

What about the players who were burned when the APB servers were shut off? Will they get their money back or be compensated in some way? "The short answer is that we don't really know yet," Book-Larsson said. "Our goal is to try to accommodate everybody, but because we're giving away the game for free no matter what, what we're very likely to do is come up with a way to let those who have subscriptions get premium accounts when the game relaunches. It's just a matter of figuring out the mechanics of doing that."

Perhaps the most interesting thing to take from the announcement from GamersFirst is that APB: Reloaded will have next to no involvement from its original creators or Dave Jones.

"We're always interested in talking to any of the original staff, if they are still around, but most of the really top staff sort of scattered," Book-Larsson said. "[Realtime Worlds] wasn't really able to sell it as a going company, they essentially sold it just for parts. It's kind of sad."

The good part is that due to the sale of the IP rights of APB, all of the former employees of Realtime Worlds will get the money that is owed them. "As a consequence of the IPR asset sale all outstanding wages and holiday pay claims will be met in full," the administrator for the case said.

The story of APB and Realtime Worlds has now reached a conclusion, and while it's not exactly a happy ending, I feel a lot better knowing that both the former customers and employees are not getting screwed.