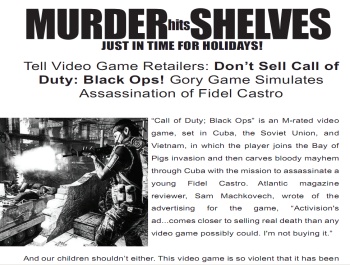 The Alliance for Global Justice is calling on citizens to "demand" the removal of Call of Duty: Black Ops from store shelves, warning that dozens of retailers are "dealing this pornography to the children in your community" at this very moment.

The Cuban government made some noise last week about Call of Duty: Black Ops, specifically a mission in which the player must battle through the streets of Havana in an attempt to assassinate a young Fidel Castro shortly after his overthrow of the Batista regime in 1959. That, somehow, got the attention of the Alliance for Global Justice, which made it the focal point of its call to have the game pulled from store shelves.

The AFGJ describes Black Ops as a "hyper-realistic violent Cold War role-playing game in which the player joins the Bay of Pigs invasion and then carves bloody mayhem through Cuba with the mission to assassinate a young Fidel Castro." It points out that G4TV.com called the Cuban criticism "understandable," as well as the column in the Atlantic which criticized an ad for the game as being "closer to selling real death than any videogame possibly could." It also notes that the game has already been censored in both Germany and Japan.

"Wal-Mart, Best Buy, and dozens of other retailers in your community are today dealing this pornography to the children in your community," the AFGJ ominously warns. "It is part of the whole culture of U.S. militarism with the entertainment industry's role being to desensitize us to violence. Our children are the most vulnerable."

The group wants people to demand the removal of the game from store shelves and offers some helpful advice on how to go about making it happen. A pre-made letter is provided that can be mailed to local stores warning them that the game "could be considered a form of pornography to which local laws apply," as is a flyer in PDF format that's meant to be printed and handed out in front of stores that sell the game. Face-to-face meetings with store managers are encouraged, while city councils can be asked to declare the game a violation of local pornography laws.

It's actually a fairly conventional grassroots threat for the most part, although invoking the specter of obscenity laws is an interesting approach. It's not all that terribly new, however; the idea of regulating videogame sales by declaring them obscene can be traced back several years to none other than disbarred-for-life ex-attorney Jack Thompson, who attempted to skirt the First Amendment by having games classified as pornography, an effort which ultimately met with failure.

Black Ops is rated M, which means it's not meant for children and according to the FTC isn't being sold to them in meaningful numbers anyway. Nonetheless, the AFGJ, which like most such groups claims that it does not "advocate censorship of speech," wants it gone. "Take action now to derail the industry projection that Call to Duty: Black Ops will be the biggest video game seller of the holiday season," the site urges readers. "Tell the retailers in your community that the game is a violation of your community's values and you demand that they take it off their shelves."