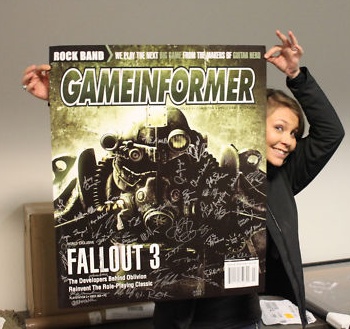 Bethesda is auctioning off some very cool, one-of-a-kind Fallout, Rage and Brink swag on eBay, with all proceeds going to the Brian Wood Memorial Trust.

Brian R. Wood, a designer at Relic Entertainment and one of the principal people behind the Company of Heroes franchise, was killed in September when his vehicle was struck head-on by an intoxicated driver while traveling through Washington State. His wife Erin, who was six months pregnant at the time, said Wood swerved his SUV at the last second, taking the brunt of the collision himself and saving her and their unborn child.

Shortly after his death the Brian Wood Memorial Trust was established to help Erin and her baby cope with his loss and now Bethesda is giving gamers a chance to help out a great cause while scoring some truly sweet loot at the same time. The company has been collecting unique items over the past couple of months to auction on eBay, and today the action begins. Check it!

Be warned: This stuff isn't cheap. Actually, the signed copy of Fallout: New Vegas for the Xbox 360 is sitting at $51, which is pretty reasonable considering that the game normally lists on GameStop for 60 bucks, but you're kidding yourself if you think that price is going to stay there. The auction action began today and runs for seven days, so clear some room on the ol' credit card and have at it!