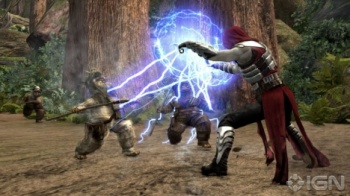 Your disgusting Ewok-murdering fantasies can finally be realized in Star Wars: The Force Unleashed II.

Ever since Ewoks made their first appearance in Star Wars: Return of the Jedi, people have wanted them dead. These people will finally get their chance to destroy the furry humanoids in the upcoming DLC for Star Wars: The Force Unleashed II, which will take place on Endor during the events of the movie.

The DLC is a "what if" situation that LucasArts says is part of the "infinite storyline" which imagines what Return of the Jedi would be like if Force Unleashed's StarKiller showed up. It's more of a bonus mission than an extension of the Force Unleashed storyline, similar to what was done with the Hoth bonus mission from the first game.

LucasArts' Gia Corsi told IGN that DLC like this is a "pretty sweet opportunity" to see an alternate take on established Star Wars canon, and confirms: "Yes, there will be battles with Ewoks!" Screenshots show StarKiller haplessly murdering Ewoks with Force lightning as they try to stab him with spears. You would think they'd be smarter than that.

The DLC will also add new achievements, including one called "Sith Kicker." It presumes that players chose the Dark Side simply because LucasArts thought it'd be awesome to throw a "bad ass" Sith down on Endor, and who can't agree with that? The DLC is said to be coming "later this year," but a price hasn't been announced yet.