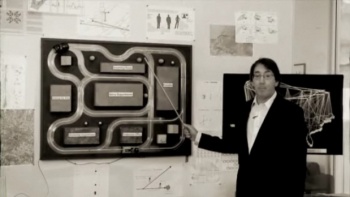 Get ready to choose your own adventure on national television with Bar Karma, Will Wright's new project that lets television watchers have a hand in crafting a television show.

You may remember Will Wright from such games as The Sims and Spore, releases which were noteworthy first and foremost for the way they let people experiment with various scenarios and play around in pretty much whatever way they wanted. His new project, a television show called Bar Karma, is very similar in many ways, inviting fans to take part in the creation of scenes and story lines that will play out during its 12-episode run.

Set in "a watering hole like Cheers, located in a town like Twin Peaks, all transported into The Twilight Zone," Bar Karma tells the tale of a man who wins a time-traveling bar in a card game. Customers from the past and future are given the chance to enter an alternate timeline and right a wrong from their own, so that "when the leave the bar this new timeline will not suffer the same fate."

The admittedly bizarre premise was one of many idea submitted by an online "beta community," which was eventually narrowed to three possibilities and then voted on. But that was merely the beginning, and the simplest part, of the crowdsourced television project. Current TV, the cable network offering the show, today opened up the Creation Studio website, giving fans access to Wright's StoryMaker software in order to create scenes and stories for use in the show.

"In essence, what the players are doing is creating a graphic novel, and we're interpreting that graphic novel for television," Wright said.

Wright said it was gamers who made up and shared stories for their Sims characters who gave him the idea. "It was not just the quantity of storytelling, but the fact that so many people were actually consuming these stories," he said. "A lot of them were telling stories independently, but then they started weaving content and characters and story lines. So I think that they really wanted to get more into a communal storytelling sandbox."

Participants throw ideas into a "pitch pool," which are then laid out in storyboard format. Ideas are then winnowed into a plot through a series of votes, during which time the crowd can implement changes, as can the actual production team, which reserves the right to modify ideas and toss in surprises as it sees fit. Bar Karma is currently scheduled to run for twelve 30-minute episodes and as Wright himself noted, nobody knows where it will lead.

"It's basically a Choose Your Own Adventure book with thousands of people creating collaboratively, and anybody can add a branch or a page to that book," Wright said. "It's a natural evolution of media as fans expect more interactivity and participation."