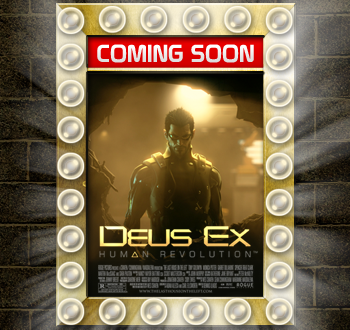 No matter how good a trailer might be, it can never tell players everything that they need to know.

Like prophets of old, gamers must pick through the entrails of a trailer to learn hidden wisdom. It's not the will of the gods they're trying to discover though, it's whether or not a videogame will be fun to play. In Issue 280 of The Escapist, Adam Greenbrier says that a trailer will always be an unwieldy tool for imparting anything but the most superficial information about a game, and that demos should be everywhere.

Deus Ex 3 isn't a movie; it's a videogame and so carries with it the promise of interaction. The world you see in that trailer won't be one you watch in a darkened theater but one you'll inhabit and explore, controller in hand. Those people you see are characters you'll meet; those cityscapes are ones you'll fight, sneak, and run through. As brilliantly evocative as the trailer is, it does not, and cannot, truly speak to the experience of playing the game.

This is not a problem that's unique to this one trailer. Nearly every major release these days is heralded by a cinematic trailer that might be rendered by the game's engine but contains little to no footage of the game actually being played. Trailers are usually rolled out when the game is announced, creating a vision of it sometimes years before its release.

[T]he purpose of these cinematic trailers [is] to evoke an idea of what a game's developers hope the game will feel like while you're playing it. Diablo III will mostly involve killing small groups of things and looting the bodies for gold, but Blizzard no doubt wants you to believe your dungeon-crawling is part of mythic, world-shaking events. Halo: Reach never feels as desperate, dramatic, and downright heroic as the "Deliver Hope" commercials would imply.

Greenbrier thinks that demos would do a much better job of giving gamers a sense of what a game is really like, but admits that not every publisher is willing to spend the money on something where the return is hard to gauge. You can read more in Greenbrier's article, "You Can't Judge a Game by It's Trailer."

Escape to the Movies: The Unseen MovieBob 81 Comments
Comments on