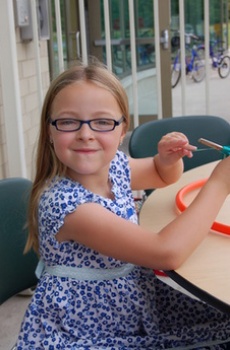 Boys teased Katie for her Star Wars water bottle, but the internet came to the little girl's defense.

This story's got a happy ending, but man, did it start out sad. Katie is a first-grader in Chicago, Illinois. Her mother took her back-to-school shopping a few months ago, and lil' Katie picked out a bunch of Star Wars swag, including a matching backpack and water bottle. Last week, Katie came home and asked her mother for a different water bottle. Mom sensed something wasn't right, and pressed the issue. That's when Katie began to cry, saying "The first grade boys are teasing me at lunch because I have a Star Wars water bottle. They say it's only for boys. Every day they make fun of me for drinking out of it. I want them to stop, so I'll just bring a pink water bottle."

Mom Carrie blogged about the incident on November 15th, and by the 18th the internet had exploded with a resounding, "oh, HELL no." Twitter messages of support (#MayTheForceBeWithKatie) have been zipping around ever since. Goldman's blog has received over 1,200 comments, and she has updated the original post assuring readers that "Katie is reading all of them." In a coup de grace that is nearly too cute for words, Goldman's update also said, "today she wore a Star Wars shirt to school and said to me, 'Tell the people about it!!!!'"

Ultimately, Katie has been invited to the Chicago premiere of a Clone Wars film by its Yoda, Tom Kane. She also received a Star Wars sketch card of herself, holding a lightsaber, drawn by artist Scott Zirkel. Star Wars toys and paraphernalia have been offered up in droves; the Goldman family requests that these toys be instead sent to local children's hospitals.