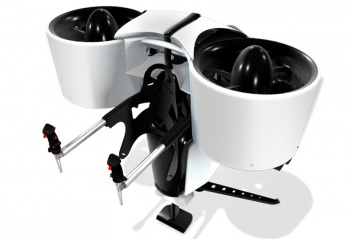 Finally, after years of teasing, the future is finally going to give us what it promised; commercially available Jetpacks.

Martin Aircraft, a New Zealand-based company, is about to enter the production phase for its new Jetpack creatively called ... The Martin Jetpack.

The Jetpack, which can fly for about 30 minutes at its top speed of 63mph, does not require a pilot's licence to fly, as its top speed and weight qualify it as an "ultralight" class air vehicle. Not only that, but the Jetpack itself is supposed to be very easy to operate.

"We're trying to make the world's easiest-to-fly aircraft. Our goal is to create a Segway for the sky, where the principles of flying would be very simple," says Richard Lauder, chief executive of Martin Aircraft.

The manufacturer is only going to produce 800 Jetpacks a year at first, but the $100,000 price tag will probably prevent a rush of Jetpack-enthusiasts.

"I certainly don't think it's going to be a George Jetson-sort-of-situation here, where there's one on every block, especially when the price starts out at $100,000," says Dick Knapinski, communications director for the Experimental Aircraft Association. "But I think you'll see a small section of people who would like to have one of those. I would do it in a second."