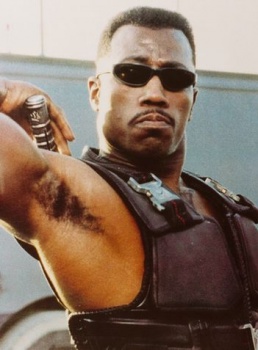 Despite raised concerns regarding the fairness of his trial, actor Wesley Snipes (Blade, To Wong Foo Thanks For Everything, Julie Newmar) is going to jail for three years. Snipes was sentenced today for a 2008 conviction of willfully failing to file tax returns and obstructing the United States Internal Revenue Service.

Not only did he probably want to avoid jail, Snipes was actually hoping to have the convicting trial thrown out entirely. According The Hollywood Reporter, "two jurors sent emails to Snipes' lawyers alleging that other members made the conclusion that he was guilty before the trial officially started...one of the witnesses Kenneth Starr, who recently pleaded guilty to fraud, gave a "tainted" testimony against Snipes." Snipes' lawyers were hoping that these perjury accusations would result in a new trial, but no dice.