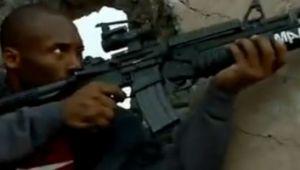 ESPN commentators are upset by Kobe Bryant's appearance in a Call of Duty: Black Ops commercial where the NBA star wields a grenade launcher.

In an article for ESPN, Tim Keown calls the ad (featuring Jimmy Kimmel and a horde of average people alongside Kobe wildly shooting at each other in a war zone), "one of the most irresponsible messages in the history of advertising."

In the ESPN show 1st and 10, co-host Bomani Jones said, "If we're really talking about what's problematic and destructive, they put out six million copies of this videogame, as I understand it, thus far, and all we're doing is shooting and killing people."

Whether or not the ad is offensive or irresponsible, as some ESPN commentators claim, it has been very well received by the public. In an ad analysis released by the firm Ace Metrix, the Black Ops ad was rated 70 points higher than other videogame ads on a 950 point scale. The only people that rated the ad lower than average were women above 35, who are certainly not the target demographic.

Mark Medina, of the Los Angeles Times, said of the commercial, " ... I think the commercial featuring a happy-go lucky vibe with ordinary citizens pretending to be in combat downplays the seriousness that real combat entails."

Personally, I found it obvious when watching the commercial, found here, that the ordinary citizens were not represented as "in combat" at all. The fact that many had their in-game aliases painted on their weapons and that a concierge answered the phone in the middle of a gunfight showed they were merely taking the place of their in-game avatars, showing that in the game you will be playing against other people of all stripes, including celebrities like Bryant and Jimmy Kimmel.

The game, after 5 days on sale, has made an estimated $650 million, so "irresponsible" or not, the commercial seems to be doing its job.

Sources: ESPN, Gamasutra, and The Los Angeles Times, via N4G.