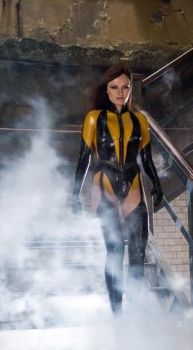 As for the current casting, Akerman's credits include 27 Dresses, Couple's Retreat, and The Heartbreak Kid, but most of us nerds remember her as Laurie Jupiter, the infamous Silk Spectre II in 2009's Watchmen. In that film, she was featured in the most laughable love scene I've ever had to sit through. I won't be seeing it, but Inferno should be interesting.