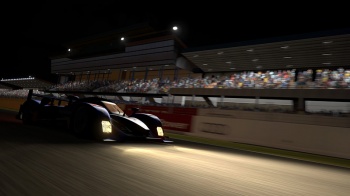 Kazunori Yamauchi really wouldn't mind working on something that didn't involve cars for once.

Polyphony Digital CEO Kazunori Yamauchi has spent more than 15 years working on the Gran Turismo series, which will see its fifth entry finally released on November 24. In an interview with NowGamer, Yamauchi emphasizes that he enjoys working on Gran Turismo, but would "love" to work on something else too.

Yamauchi, 43, starting working on the original Gran Turismo for the PlayStation when he was 25. At the time, he had "maybe 50 kilometers" of driving experience. Today, he knows driving, cars, and racing better than most people on the planet. His obsession with the racing genre has come in handy, generating millions of copies sold for Gran Turismo, but at the same time Yamauchi feels like he may be "missing out" on other things.

He looks at games like LittleBigPlanet and Killzone 2 and thinks: "'Oh, wow, so this is what they're doing with games these days.'" Meanwhile, he's off driving a Lexus IS-F Race Car somewhere, the poor guy.

When asked if he would make something other than Gran Turismo someday, Yamauchi said: "Well, since you ask, I will say that there are no plans, though I certainly have ideas for new games all the time. Every day. I really, really would love to try making some other type of game.  "

Yamauchi admits that Gran Turmiso may have become his life. "Making Gran Turismo is a lot of fun, really, though maybe I've missed out on a lot of things by working so hard on Gran Turismo," he added. Yamauchi apparently won't get a break either, with Gran Turismo 6's development already being discussed. If Yamauchi ever did want to escape from Gran Turismo, at least he has the getaway vehicles to do it with.