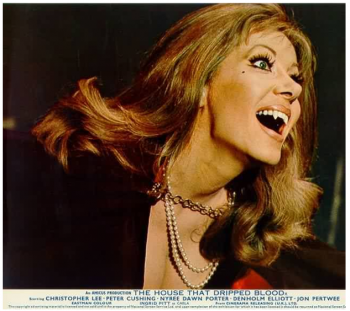 A moment of silence for Ingrid Pitt, the woman who became famous for her acting but was fascinating for so many other reasons.

For many, Ingrid Pitt's name is synonymous with horror films from the 1960s and 70s. She was a vampire. She was Elizabeth Bathory. She was a haunted actress. She was an MI6 agent who helped Clint Eastwood fight the Nazis. She was all of these things and more. Yesterday, though, she passed away, presumably from a heart attack.

Pitt's life reads like the script to a pretty epic movie. She was born in 1937, and her birth actually spoiled her parents' intended escape from the Nazis. She survived living in a Concentration Camp, married an American Soldier and moved to California with him, she moved back to Europe and eventually became an actress after she divorced.

Pitt had her fist movie appearance with a minor role in Doctor Zhivago in 1965. In the years that followed, she continued to work steadily until she got noticed for her work with Hammer Film Productions, gaining notoriety for her parts in The Vampire Lovers, Countess Dracula, and The House that Dripped Blood. She even had a role in the original Wicker Man.

Aside from her movie and television roles (including two appearances on Doctor Who), the woman became a prolific writer who penned both newspaper columns and novels. At some point, she earned a black belt in Karate and a student pilot's license.

It's always sad to hear about the passing of a gifted artist, but this story seems simultaneously bittersweet and uplifting. While Pitt is gone, she lived an extraordinary life even after being born into one full of horror and tragedy. R.I.P. Ingrid.

Read more on Pitt at io9.