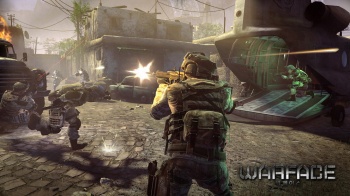 A upcoming game from Crytek will see the studio that brought us the processor-torturing Crysis dip its toe into the world of free-to-play gaming.

The Seoul branch of Crytek has unveiled its entry for "Silliest Game Name 2010" award, with a new title bearing the hard-to-say-without-cracking-a-smile moniker, Warface.

Built using the CryEngine 3, Warface is a free-to-play near-future multiplayer military shooter aimed at the Asian market and supported by micropayments. The game is said to be the alpha stages right now, and will feature both co-op and PvP gameplay. In a press release, Crytek CEO Cervat Yerli said that his company always strived to provide the best possible gameplay experience. He added that the reason that Crytek had opened an office in South Korea in the first place was so that it could make games tailored to the tastes of that part of the world.

Warface is something of a departure for Crysis, which has never made a F2P online shooter before. It'll likely be playable wherever you are - with a pretty significant language barrier of course - but I must admit the screen shots make it look a little generic. It's still early days though, so this might be one to watch.