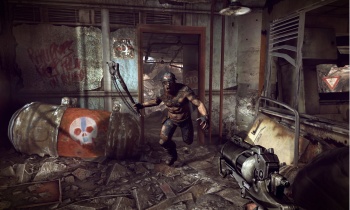 According to the co-founder of id Software, digital distribution will take over the videogame industry for sure.

Over the years, co-founder and current technical director of id Software John Carmack has been a pioneer of videogame engine technology. Using his pioneering vision, John Carmack recently said he feels there is no doubt that digital distribution will take over the industry, cutting out traditional retail for good.

Speaking to the Telegraph about developing the iPhone version of id's Rage, Carmack said he prefers platforms like the iPhone/iPad over the DS and PSP because of product distribution. To Carmack, the App Store and other digital platforms are vastly preferable to traditional retail avenues.

"You know, I really, really like the App Store platform as far as being able to remove obstacles to getting your product out," Carmack said. "You don't have to cut deals with publishers. It's almost completely egalitarian on there."

He also likes that it's easier on platforms like the App Store to take feedback from consumers and update a product right away. He calls digital distribution "the wave of the future."

"Everybody knows that eventually [everything] will be digital distribution like this - it's only a question of time," Carmack added. "Clearly, packaged goods sales are still critical on the big platforms at this stage, but that's all going to go away sooner or later. This is the model of the future."

Brick-and-mortar retail outlets themselves are afraid of the possibility, with that fear perhaps growing recently due to increasing digital sales numbers. However, I've found myself wondering lately if digital distribution can ever really annihilate traditional retail as we know it.

Digital distribution will definitely become a new possibility for gamers to purchase product, and we know this because it already has with platforms like Steam dominating. As far as it taking over like Carmack predicts, I'm not so sure. After all, doesn't the average consumer still need a place to buy their consoles in the first place? Will the current retail outlets want to stock items that only sell digital products? Will the mainstream gamer that isn't aware of the inner-workings of the videogame industry be able to swap his/her purchasing habits to get rid of discs completely? It's a common thought pattern to say that the industry will go digital someday, but there are a lot of details that have to be worked out before that ever happens, making me think that retail outlets will always be around to keep a large portion of the industry's audience in the fold.