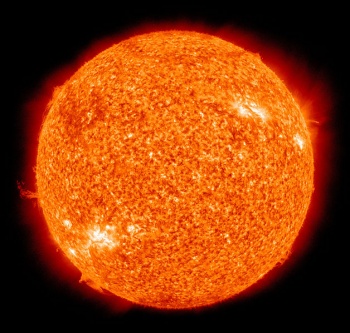 A woman that says she's taking advantage of international law has staked a claim on the sun.

You know that big red ball of fire in the sky that heats you up on a hot day and appears useless but still keeps you alive on a cold one? Yeah, the Sun? Well, that 4.5 billion year old star now has a new owner, and it isn't god, so get ready for a huge increase in your heating bill. Angeles Duran of Spain, 49, recently filed for and was granted what she says is legal ownership of the Sun.

The U.N.'s Outer Space Treaty states that "outer space is not subject to national appropriation by claim of sovereignty, by means of use or occupation, or by any other means." Duran says this means that countries cannot claim celestial bodies, but individuals are still free to do so. She apparently registered ownership of the Sun with a local notary public and is now in possession of an official document that states she is the "owner of the Sun, a star of spectral type G2, located in the centre of the solar system, located at an average distance from Earth of about 149,600,000 kilometres."

Duran's claim is similar to one made decades ago. Dennis Hope did the same thing as Duran in 1980, but with the Moon. Hope has actually earned money off of his claim by selling acres of land on the Moon to rubes, generating millions of dollars, though it might not be as easy for Duran to do the same thing. Who the hell wants to own something that'll burn you from millions of miles away? Neither claim is officially recognized by the U.N.

Duran says: "There was no snag, I backed my claim legally, I am not stupid, I know the law. I did it but anyone else could have done it, it simply occurred to me first." She plans on charging a fee to anyone that "uses the Sun," giving half to Spain, 20% to Spain's pension fund, 10% to research, 10% towards ending world hunger, and she's keeping the remainder for herself. Good luck collecting.

It wasn't mentioned what Duran meant by "using the Sun," so she could attempt to siphon funds from either Kindergartners or astronomers. It's nice that Duran wants to end world hunger, but if this generates a single penny for her I'll be really upset. You don't own the Sun, Ms. Duran, so just knock it off. Then again, it would be nice to own an acre of Sun for when I retire, just in case she actually does.

Critical Intel: Our Destiny in the Stars: The Reality Behind Terraforming Robert Rath 14 Comments
Comments on