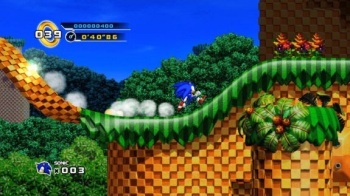 According to the Sonic 4 leaderboards, everyone's favorite blue hedgehog has learned how to teleport.

Rampant cheating has prompted Sega to completely reset one of the leaderboards for the first episode of Sonic 4. After hackers and cheaters posted a series of impossible scores on the game's time trial leaderboard, Sega decided the only solution was to start over.

The biggest problem seems to be on the Xbox 360 leaderboards, were forum posters were complaining of dozens of scores of 00'00"00. Even on the Wii, screenshots show that people with these impossible scores took the top two spots on the leader board for both the Splash Hill Zone and the Casino Street Zone.

In an effort to curtail the hackers, assistant community manager Aaron Webber announced on the 24th that Sega was resetting the 360 leaderboards. While this cleared out all the hacked scores, it also made it very difficult for legitimate players to get back on the leaderboard without deleting their saved games, as they had to beat their existing scores to be able to post a new one.

Sega hasn't announced a fix for the hacking problem, so this is a temporary solution at best. Just a couple of days after the reset, the hackers had already started to post new and impossible scores. Hopefully Sega will be able to fix the problem soon so that people will be able to enjoy posting new times without having to wade through pages and pages of cheaters first. At the very least, hopefully Sega will find a way to remove the impossible scores and leave the legitimate ones intact.