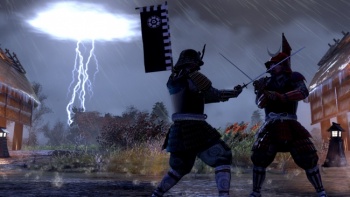 Sega has shaken the very foundations of the title of Shogun 2: Total War with a radically different new name. Okay, maybe it isn't that different.

I've always been fascinated by the art of titles. This is what people will forever know your game as, this is one of the first things that will catch their mind - there's a lot of pressure that goes into coming up with a videogame title. It takes a lot of guts to change a title of a game in development, too - you could be throwing away any pre-launch hype you'd built up amongst gamers who don't check news sites every day.

Of course, you could also be just switching around the order of the words in your title. According to publisher Sega, The Creative Assembly's upcoming Shogun 2: Total War is now Total War: Shogun 2.

Frankly, this change makes sense. It always felt a bit weird to see that "2" right in the middle of the title as opposed to the end. Sega says that the intention to invert the standard Total War naming convention had been around for some time, but you'd think they'd have gotten around to it for Medieval 2: Total War. Now it just looks awkward, guys!

I say Sega should just hedge its bets and settle for Shogun II: Total War: Shogun 2. When you think about it, it's really not all that much more awkward a title than the various Phoenix Wright sequels.