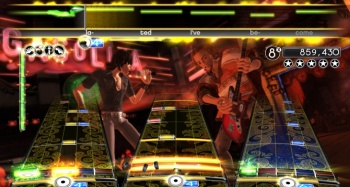 Whoever buys Harmonix runs the risk of doing themselves more harm than good, says EA's CEO.

It may be the distributor for the Rock Band games, but EA says it will not be buying their developer, Harmonix. Speaking to Bloomberg, CEO John Riccitiello said that such an acquisition made would make a certain kind of sense, but that it wasn't the strategic direction EA wanted to take.

Riccitiello believed that purchasing Harmonix would send the message that EA was "doubling down" on the victories of the past, which made it more difficult to convince investors that the future of EA - which included social and casual gaming - was the "Promised Land." He compared buying Harmonix to trying to catch a falling knife, saying that the buyer's timing would have to be just right to be successful. He pointed out however, that most people who tried to catch a falling knife just ended up cutting their hands.

It's a hard to argue with Riccitiello, as neither of the most recent Rock Band or Guitar Hero games have sold particularly well. If the bubble has burst and people aren't buying music games, then you can hardly blame publishers like EA for being hesitant about buying the studio, just as you can't really blame Viacom for wanting to sell.