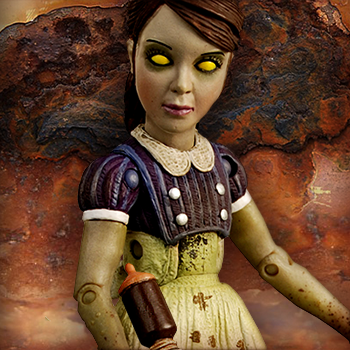 The fortunes of videogames themselves may rise and fall, but videogame toys are consistently successful.

From statuettes of Devil May Cry's Dante to thousand dollar replicas of Gears of War's signature weapon, the Lancer, gamers love being able to actually put their hands on some of the cool stuff that appears in videogames. In Issue 282 of The Escapist, Tracey John talks to the makers of these trinkets and tie-ins, and finds out why they're so appealing.

"The popularity of videogame toys has definitely increased, and there's more of a demand now," said Randy Falk, director of product development at NECA. Having made action figures based on Gears of War, BioShock, Assassin's Creed, Resident Evil, Dead Space and Street Fighter, to name a few, the New Jersey-based collectibles company has certainly seen the rise of videogame toys in recent years. Although NECA is also in the business of making toys for movie licenses, Falk said that videogames are where it's at right now.

"In many cases, games are exceeding movies now in terms of revenue, and to be honest, there aren't a lot of great new movies being made," he explained. "Between all the sequels, re-makes and unnecessary 3D, videogames have filled the void for new and exciting content, and that includes videogame toys."

Many manufacturers and stockists have trouble keeping videogame merchandise on their shelves, although they admit that not every toy line is a big hit, especially those more grounded in realism like Grand Theft Auto or Call of Duty. You can read more about the wonderful world of videogame toys in John's article, "Toy Story."

Letters to the Editor: Collections Agents The Escapist Staff 0 Comments

All That's Shiny is Gold Murray Chu 44 Comments
Comments on