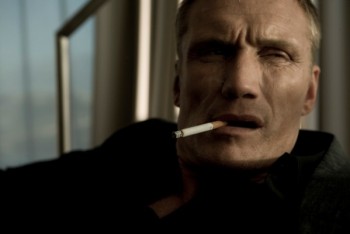 Uwe Boll is getting ready to direct a sequel to the Dungeon Siege movie starring none other than the Red Scorpion himself.

First things first: Yes, a sequel to In the Name of the King: A Dungeon Siege Tale, aka the worst thing Jason Statham has ever done, is in the works. And yes, every gamer's favorite film director Uwe Boll is at the helm once again. But this time around, Statham is out, replaced by the Big Red Machine, Dolph Lundgren, who plays "an ex-middle ages war veteran who gets f**ked up but he gets pulled into some sort of medieval power struggle, kind of gets a bit of a redemption for all his pains in service."

You get all that? Lundgren, who's appeared in films only sporadically over the past decade or so, said he was looking forward to "exercising his acting chops" as he gets ready for Expendables 2.

The Dungeon Siege name is being dropped from the title of the new film, which will be known simply as In the Name of the King 2. Fortunately for those who appreciate this sort of thing, the essential qualities that underlie every Uwe Boll film will remain intact. "It's like contemporary, right now big city, and we have Dolph Lundgren basically being a cop or like a fighting coordinator working as this, and one night he gets attacked by ninjas in his house and fell with the ninjas into a vortex back in time," the director explained, describing what sounds like a classic Boll flick. "And then it turns out it's like 50 years after the first part, In the Name of the King, ended, and Ehb is destroyed and everybody is dead, Jason Statham and everybody who was in the first part, got wiped out."

So to sum up, Dolph Lundgren gets attacked by ninjas, sucked into a time vortex and dropped on his ass as the new King of Ehb. Is that not epic? I'm thinking that it might actually be time to watch a Uwe Boll movie. No word yet on when this blockbuster motion picture event will get a theatrical release but shooting is set to begin early next year.

Trivia bit: Although best known for playing gigantic Russian killing machines, Lundgren was actually born in Sweden, is a Fulbright Scholar with a master's degree in chemical engineering and speaks seven languages. Oh, and there's apparently going to be an Expendables 2.