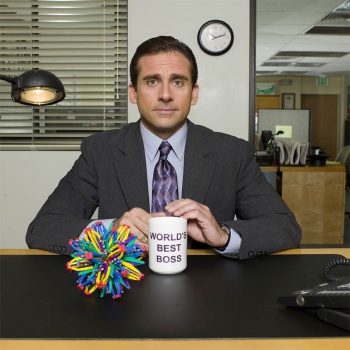 Steve Carell is leaving The Office, but he isn't leaving NBC, the network on which it airs: He's writing and producing a sitcom there.

The National Broadcasting Corporation (NBC) will lose Steve Carell from The Office this year. They won't shake him entirely, though, as they've just purchased a sitcom that Carell is both writing and executive producing. Carell has spent most of his career in front of the camera, but has written for The Office and The Dana Carvey Show, as well as for the film The 40 Year Old Virgin.

The show, which is operating under the tentative title The Post-Graduate Project, is a single-camera comedy based upon one of Carell's early jobs. Deadline describes the project "as a sweet and nostalgic take on the period of Carell's early life as a mail carrier and centers on a small-town post office frequented by a quirky but tight-knit group of local twentysomethings."

On The Office, Carell plays Regional Manager Michael Scott, a character based upon David Brent from the original British series. For this role, Carell was nominated for multiple Emmys, and was the recipient of a Golden Globe. Upon his departure, he will have been on The Office for seven years.

High Definition: NBC's State of Affairs Is No Followup to The Blacklist MovieBob 6 Comments
Comments on