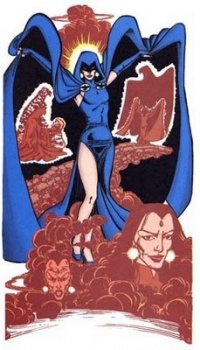 With Smallville coming to a close, The CW network is looking to fill the void with a series based on another DC character.

This is Smallville's tenth and final season, and airing network The CW is readying another comic book series as its replacement. Variety reports that the network is looking to air a series about the half-human, half-demon Raven, a 1980s era DC comics creation who boasts the ability to both teleport and read other's emotions. Diego Gutierrez (Buffy the Vampire Slayer, V) is set to write and executive produce, and the CW is teaming up with Warner Bros. TV and DC Entertainment on the project.

This wouldn't be empath Rachel Roth's first tenure at The CW, as she joined Robin, Starfire, and Beast Boy on the animated Teen Titans. The program ran for five seasons, and is now airing in syndication on the Boomerang channel. The CW was also the home of the 2002 live-action DC series Birds of Prey, but that show failed to find an audience, and was canceled after one season.

Besides Birds of Prey, The CW has tried to capture the Smallville lightning before. Variety recalls "the last time The CW looked to adapt a DC Comics character, it turned to Robin. In 2008, the netlet gave a commitment to The Graysons, which was to follow the world of Dick "DJ" Grayson before he took on the iconic Robin identity and aligned himself with Batman," but the series was axed "after Warner Bros. Pictures Group prexy Jeff Robinov decided he didn't want the series to run simultaneous with Christopher Nolan's Batman movie franchise."

High Definition: 8 Villains Who Could Menace The Flash MovieBob 19 Comments