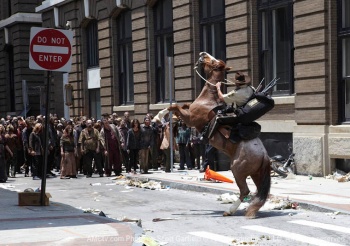 Reports of The Walking Dead's writing staff having been axed like a zombie skull aren't true.

Co-executive producer Gail Anne Hurd recently stated that reports of these firings were "completely inaccurate." She says that certain Walking Dead writers simply have other projects in the works that have priority to them, likely referring to prominent writer Charles Eglee.

Walking Dead creator Robert Kirkman says that Eglee, who has previously worked on Dexter and The Shield, did leave The Walking Dead's writing staff because he was expecting to run the whole shebang after the first season. He was brought on as Frank Darabont's second-in-command and was set to takeover for season two, but Darabont decided to resume work on the show so Eglee moved on to other projects he could lead. Darabont didn't fire anybody, according to Kirkman, and he doesn't want anybody to get the wrong idea.

Kirkman did admit that writing duties for The Walking Dead's second 13-episode season are still being worked out. "It's a little premature to be nailing down," he revealed. "I don't know if it's going to be a freelance situation or if we're going to have writers in a writers' room. That's something that's being worked on now."

He also pointed out that The Walking Dead's staff are pros and still going to make the best show possible, so nobody should worry about the quality of season two. Sadly, I hope you've DVR'ed the show's first six episodes or plan to buy the Blu-rays to get your fix, because it's rumored that the second season won't air until October 2011.