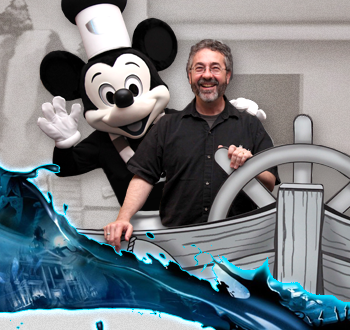 Paint and thinner are pretty important in Epic Mickey, but one must never overlook the contributions of rollercoasters.

Disney's library of movies and cartoons are more than enough to inspire an entire library of videogames. While Epic Mickey creator Warren Spector spent plenty of time picking through Disney's back catalog, he also drew on the various Disney theme parks from around the world to help design some of the game's locations. In Issue 283 of The Escapist, Matt Cabral speaks with Spector, who explains the ground rules he set himself when taking inspiration from the theme parks, and how and why those rules came about.

"I set a cut-off date for things in Wasteland of 1967 because it was a big year. Pirates was the last ride Walt himself had anything to do with creating. Additionally, 1967's Jungle Book was the last feature film he had anything to do with, so I thought that would be an appropriate cut-off date; so nothing in Wasteland - at least not that we know of - comes from after that. I wanted to honor Walt's memory by saying that when he passed on, the world that his imagination brought into being was frozen in time."

In addition to hearing lots of "yo-ho-hos" in Epic Mickey, players ears' will be bathed in plenty of "boos" when they enter Lonesome Manor, the title's take on the Haunted Mansion. The popular attraction is the only one that's different in all four versions of Disney theme parks around the world, a defining feature Spector wanted represented in the game. "This one has some of the most iconic elements ... the graveyard, doom buggies, the stretching room, Madame Leota, the paintings that change, the ballroom with ghosts dancing to the pipe organ ... all that stuff is so familiar to us, we had to include it in the game ... when you play the game, it'll be up to you to figure out which parts of our Lonesome Manor came from which parks."

The various Disney theme parks around the world actually provided a hefty share of Epic Mickey's environments, in one form or another. You can read more about it in more detail in Cabral's article, "Epic Inspiration."