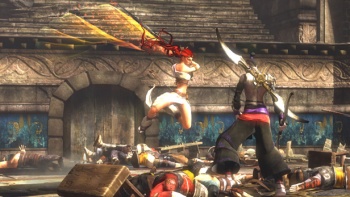 An unnamed source has revealed a host of new details about the PSP2's advanced features, including power comparable to a PS3.

Rumors are sometimes right, and sometimes wrong, but in the case of those surrounding the PSP2 they all seem to converge on the same points. A new unnamed source for IGN has confirmed some of the previous leaks about the handheld, but goes into more detail about its features and refers to a power level that could possibly be over 9000.

The source compares the processing power of the PSP2 directly to the PlayStation 3, and says it's capable of producing graphics on the level of first generation PS3 titles. The processor inside of the PSP2 wasn't specifically detailed, but is said to be more than half as powerful as the one found in the PS3. Due to lower display requirements, this could allow the PSP2 to output PS3 quality games on its smaller screen. This hints towards a possible seamless PSP2 and PS3 experience, where players begin a game on one console and continue it on the other.

As for the PSP2's other features, the source confirmed that the PSP2 will emulate the PSPgo and nix any kind of physical media drive. If the source can be believed, the PSP2 will only play downloadable games from memory or through similar methods. Still, this doesn't count out the possibility of accessories that add UMD capabilities which have been spoken of in the past.

The recently leaked development kit images were also confirmed as real by the source. The PSP2 is apparently similar to the PSPgo in that it slides up, but is larger and features dual analog sticks that are concave rather than convex. The cameras seen on the front and back are likely to be used for pictures, video, and augmented-reality games, similar to the Nintendo DSi or 3DS.

The most intriguing rumor surrounding the PSP2 has been the touchpad that is said to be on the handheld's backside. The source called this pad a "smooth, glass-like surface" and revealed that it's used for analog stick-like controls, tapping, swiping, and other gesture commands.

With all of its features, and power that could rival the PS3 in output, the big mystery in the PSP2's case is cost. Sony hasn't been known for competitive pricing as of late, so unless it's learned a lesson from the high original price of the PS3 and PSPgo we could see the world's most expensive handheld when the PSP2 is released someday. Just keep in mind that all of this information should still be considered as rumor.