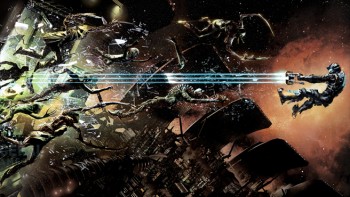 Electronic Arts is releasing a Dead Space 2 demo just in time for the holidays - but alas, there will be no love for the PC crowd.

Is there anything that says "happy holidays" like a plasma cutter vivisection? Probably, but who cares, because we're going to be playing Dead Space 2! A little taste of it, anyway, while we wait around for the real thing to show up. The demo will take players on "a terrifying adventure through the Church of Unitology," a place of sanctuary that turns deadly during the Necromorph outbreak on the Sprawl.

"Releasing the demo five weeks before launch will not only re-connect players with our hero Isaac Clarke, but will also give them the opportunity to experience firsthand various jaw-dropping scenarios," said Executive Producer Steve Papoutsis. The demo will let players try out new Necromorph-choppin' tools like the fun-sounding Javelin gun, experience an enhanced telekinesis ability and even take the "advanced suit," which gives players full motion control in zero-G space, for a test drive. "It's gonna be awesome," Papoutsis added.