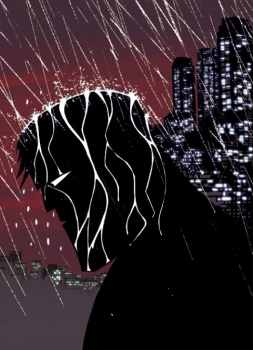 The Walking Dead television show scribe that was rumored to have been fired actually left on his own to bring another intriguing property to TV.

It was recently reported that AMC's Walking Dead showrunner Frank Darabont fired his writing staff, but that report turned out to be the mistaken result of certain writers leaving on their own, such as co-executive producer Charles Eglee. It was confirmed that Eglee left Walking Dead after Darabont decided to resume his lead role on season two, a role that Eglee was told would be his. Eglee's doing just fine though, as it's been revealed that he has his focus on becoming the top dog for another another interesting comic property in development for television.

Rumors that Eglee is now trying his best to bring Brian Michael Bendis's Powers to television have been confirmed by the comic book author himself. Powers is part superhero tale, part noir, following a duo of detectives that solve cases in a world where heroes exist, but their activities are monitored by a human police force. As an example, the very first arc revolves around the murder of Retro Girl, a popular superhero thought indestructible, with Detective Christian Walker and his new gung-ho female partner stumbling upon clues and questioning superheroes, supervillains, and crime bosses.

After the rumor was swirling about the internet, Bendis posted on Twitter: "Ok, i rarely do this. but the Powers TV rumor that hit the net today... confirmed as fact!" This comic book property in the hands of Eglee could easily be the next big show on television. Heroes did well for itself, and though some would say it fell apart in later seasons it proved that there is an audience for the genre.

The reason Eglee's involvement is such a huge deal is because he was a driving force behind acclaimed crime shows such as Dexter, The Shield, and Murder One. Throw superheroes and supervillains into any of those, and you've got what the Powers television show should be like. Eglee has even worked with superhumans before as writer and executive producer on Dark Angel, so he and Powers is a match made in heaven.

Eglee's deal with Powers has reportedly been in the works for a very long time, with FX executives such as president John Langraf said to be "high" on the property. Nothing has been greenlit or made final yet, but don't be surprised if you hear about a new show called Powers again in the near future, and don't forget to tune in either.