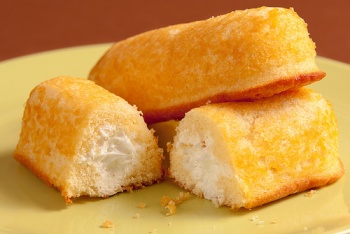 A professor of nutrition decided to experiment eating small amounts of junk food over a two month period and shed 27 pounds.

It's sounds like a fat kid's dream come true. "I can eat Twinkies and lose weight at the same time? That's unpossible!" But Mark Haub, who teaches nutrition at Kansas State University, has proved that it is in fact possible to lose weight and feel healthier eating packaged foods like Hostess cakes and soda. The most important part of losing weight, as Haub's experiment proves, is limiting that amount of calories ingested and it doesn't matter what those calories are. For ten weeks, Haub ate Cool Ranch Doritos, sugar cereals like Corn Pops, and sipped on Diet Mountain Dew. He went from over 200 pounds to just under 174 and his body mass index dropped from 28.8 to 24.9; Haub is now perfectly healthy as opposed to overweight. Even though other health indicators like cholesterol and triglycerides (fat) levels also dropped, he can't advocate his "convenience store diet" just yet. But the data is compelling.

"I'm not geared to say this is a good thing to do," Haub said. "I'm stuck in the middle. I guess that's the frustrating part. I can't give a concrete answer. There's not enough information to do that. I wish I could say the outcomes are unhealthy. I wish I could say it's healthy. I'm not confident enough in doing that. That frustrates a lot of people. One side says it's irresponsible. It is unhealthy, but the data doesn't say that."

He supplemented his diet with a multivitamin, a serving of vegetables and a protein shake, and stayed away from meats to keep his caloric intake below 1800 per day (he was consuming over 2600 per day before the experiment.) Haub began his junk food diet with little expectations but kept it up as he saw that the pounds were falling off. The weird thing is that eating foods that are believed to be "bad" for you actually improved his health.

"That's where the head scratching comes," said Haub. "What does that mean? Does that mean I'm healthier? Or does it mean how we define health from a biology standpoint, that we're missing something?"

Haub hopes that his results will empower people to lose weight not be giving up the foods they love but by just eating less of said foods. "These foods are consumed by lots of people," he said. "It may be an issue of portion size and moderation rather than total removal. I just think it's unrealistic to expect people to totally drop these foods for vegetables and fruits. It may be healthy, but not realistic.

I participated in a bet a few years ago with my buddy. The first guy to lose 15% of his body weight would owe the other 200 bucks. That was the only motivator I needed to start eating less per day than I was before, usually snacking on fruit or vegetables when I had the urge. I lost a similar amount to Haub, but I eventually lost as my buddy beat me in a photo finish on the last week of our gentlemen's bet.

Still, if I had known I could have lost all that weight eating Twinkies instead of spinach leaves and tofu, I would have been much happier. Where were you then, Haub? Huh?