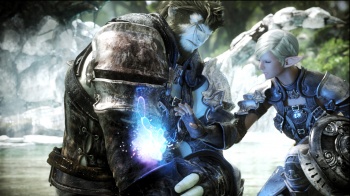 Square Enix has restructured the Final Fantasy XIV team in the hopes of getting the ailing MMO back on track as quickly as possible.

Final Fantasy XIV still isn't fixed, but it still doesn't cost anything either. Square Enix has extended the free trial period for the game for the third time, with no word for when the game's monthly fees are likely to kick in.

In a statement on the Final Fantasy XIV website, Square Enix CEO Yoichi Wada said that the game still hadn't reached the levels of enjoyment that the company wanted. Because of this, Square Enix was extending the trial period indefinitely, until it had a clearer roadmap of how long it would take to fix everything. In an effort to speed this process along, Naoki Yoshida has taken over as the game's director and producer, with a reorganized team behind him. Wada described Yoshida as charismatic and passionate man, who made customer satisfaction his top priority.

Wada also announced a delay for the PlayStation 3 version of the game, saying that Square Enix didn't want to simply convert the PC version in its current state. Instead, he said, it wanted it to be the same, fixed experience it had planned for the PC, which meant ditching the scheduled March release date. Wada didn't offer a replacement date, presumably because it's so dependent on how long it takes to fix the PC version.

You have to give Square Enix credit for both owning up to its mistakes, and not making its fans pay for them. At the same time, however, being contrite doesn't really excuse releasing the game in such a sorry state in the first place. The game's now-former producer, Hiromichi Tanaka commented in the past that the team ran out of time, suggesting that Square Enix was unwilling to move the release date. You have to assume that this was for some financial or logistical reason, but there will be a point where running the game for free stops being more cost effective than simply delaying it would have been.