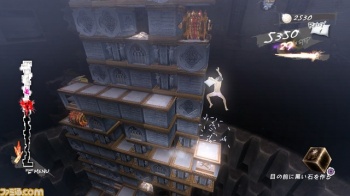 In Catherine, players much scale a tower made of blocks and seek the wisdom of the man-sheep, and no, that's not made up.

A feature in Japanese videogame magazine Famitsu has shed some light on the gameplay for Atlus' upcoming Xbox 360 and PS3 thriller, Catherine. As with pretty much everything about the game, it's probably not what you expect.

Catherine's gameplay is split up into three sections: Story, Adventure and Action. The story section appears to be the most straightforward, as it's largely just watching movies and handling any story events that pop up. The adventure part revolves around the Stray Sheep Bar, which has appeared in a number of trailers and other media for the game. According to Famitsu, this section will see lead character Vincent drinking, chatting with his friends and replying to his emails.

The action sections sound the most bizarre, as they're set in Vincent's recurring nightmare that he is being chased up a strange structure made of blocks. Each night, Vincent must scramble up this structure, moving blocks to make safe paths upwards and doing his best to avoid falling or stepping on any booby-trapped blocks. There are also exploding blocks to contend with, which detonate when stepped on and destroy any regular blocks in their blast radius. Famitsu suggests that players will be able to use exploding blocks to create new paths, although doesn't say whether the booby-trapped blocks will do anything other than skewer Vincent if he steps on them.

The eerie man-sheep from the trailers also have a part to play in Vincent's nightmares. Thankfully though, they're friends, rather than foes. If Vincent can reach them and talk to them, he can gain valuable insight when - or if - he wakes up.

I must admit, it's not what I was expecting from the "action" part of the game, but it looks like it could be interesting. There are at least six different levels to play though, with names like "The Torture Chamber" and "The Clock Tower," and there could be plenty more besides. It does clear up at least part of the mystery of what the player would actually be doing in the game, however, besides trying to manage having two girlfriends - one of whom may possibly be a demon.

Catherine is due to be released for Xbox 360 and PS3 on February 17th in Japan, and hopefully to the rest of the world not long after.