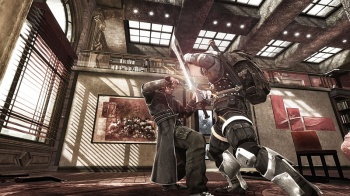 Square Enix's videogame based on Highlander has been cancelled, proving that the franchise is not actually immortal.

Anyone that grew up in the 80s and 90s should recognize Highlander, a franchise that included multiple movies, television spin-offs, and even a cartoon series. Square Enix had been working on a new Highlander videogame planned for the PC, PS3, and Xbox 360 for the past few years, but recently announced that the game's head was chopped off.

Square has revealed that Highlander: The Game has been cancelled. The Highlander franchise began with a movie of the same name released in 1986 that featured Christopher Lambert as Connor MacLeod and Sean Connery as his mentor. Both are members of a race of immortals that emerge from humanity and are forced into an eternal battle until a just one is left. The only way to kill an immortal is to cut off his/her head, taking in the killed immortal's strength in the process. The franchise's catchphrase is: "There can be only one."

It's actually an intriguing property, but has undoubtedly been mishandled. The first movie and television's Highlander: The Series which starred Adrian Paul as descendant Duncan MacLeod were both pretty cool for their time, but Highlander has many black marks on its record as well, including in my and many others' opinions, a hilariously terrible second film.

Square's Highlander: The Game, which was being developed by Widescreen Games, sounded interesting in concept. It focused on newcomer Owen MacLeod and took place in various time periods from 2,000 years ago to the modern day. Players would have had to go up against various immortals in one-on-one battles, and Owen was even able to expand his powers through the realm of magic. There wasn't any specific reason given for the cancellation.

There have been a couple of Highlander games released in the past, on platforms like the Atari Jaguar and ZX Spectrum, but nothing in the past decade. With Highlander: The Game having been cancelled, it looks like Highlander's head will remain on the ground until a possible remake of the original movie comes out, said to be in production now.