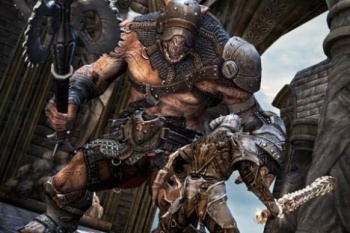 One of the first games created by a top-notch studio for the Apple platform, Infinity Blade, is also the fastest selling.

Ever since Mike Capps, President of Epic Games, took the stage at an Apple event in September and demoed the tech behind what was then called Epic Citadel, we all knew that it was a sea change for the nascent videogame market on the iPhone. Even though games have always been the top-selling applications on the App Store, the titles have largely not been what you'd call hardcore or engrossing. That's not to say anything against Angry Birds, but it's just not my kind of game. Last week, the game from Chair(Shadow Complex) debuted using a version of Epic's Unreal Engine specifically tailored for use with iOS devices. The result: Infinity Blade sold 271,424 copies as of last night, which, at a per unit price of $5.99, works out to a cold $1,625,829.76 made from the game in just 4 days.

Now, these are not official numbers, but it's still pretty safe to call Infinity Blade the fastest grossing game on the App Store. The previous record-holder was Cut the Rope, which grossed $1 million in ten days. Infinity Blade benefits from a higher price point, but the numbers over the weekend are still very impressive. Let's hope that this proof of concept for the Unreal Engine on the iOS points to more AAA development on the platform so that it becomes about more than just pissed off avians and Words with Friends.

I'll be damned if I ever buy an iDevice, though. I've been resisting the Cult of Apple for years, but this game is the first thing that might crack my resolve.

Update: Mark Rein, VP of Epic Games, just Tweeted that the sales numbers reported for Infinity Blade "are actually quite low." That means that it has made more than the $1.7 million.