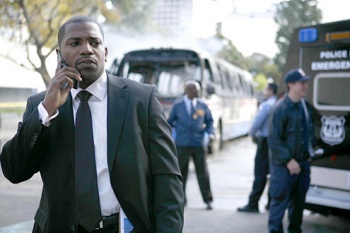 American actor Mekhi Phifer is headed to Cardiff to join the Torchwood team.

Doctor Who offshoot Torchwood is beginning production on its fourth season, and bringing in some new blood. Joining John Barrowman (Captain Jack Harkness) and Eve Myles (Gwen Cooper) will be American actor Mekhi Phifer. Phifer will play CIA agent Rex Matheson, described by Deadline as, "a fast-tracked high-flyer with a lethal sense of humor who starts to feel his mortality when his life is put in danger." It's always when your life's in danger when you start to feel your mortality, isn't it?

Phifer's previous television credits include Curb Your Enthusiasm and six years on the medical drama ER. Currently, he's appearing on the Fox procedural drama Lie To Me. Also new to the cast for Season 4 is Arlene Tur (Crash), who will play surgeon Vera Juarez.

The Starz channel is co-producing the upcoming season with the BBC, which will allow the series to air on both networks and bring the Torchwood glory to both sides of the Atlantic.