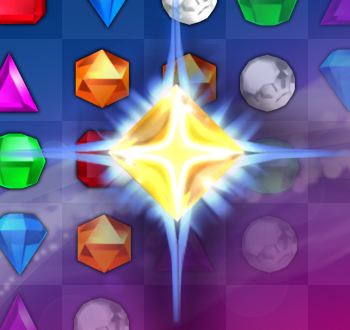 Adding things to Bejeweled is easy, but adding the right things is much, much harder.

You might think that updating a game as "simple" as Bejeweled would be a cinch. Let's face it, all you do is move shiny pebbles around, how hard could it possibly be? Unfortunately for PopCap, that's not the way it works, and in Issue 284 of The Escapist Blaine Kyllo speaks with PopCap's chief creative officer Jason Kapalka about how the game's simplicity actually makes it much harder to update than something more complicated.

But Bejeweled's popularity is problematic because people don't want it to change. Kapalka admits that upgrading it has been difficult. "It's a game that people obviously like in its basic form," he says. "You want to try and keep updating it ... but at the same time you don't want to wreck it by adding silly things."

PopCap has tried to avoid what he believes happened with that other popular puzzle game. "Tetris would always have these updates," Kapalka explains, "and they'd have some new thing, and the new thing would kind of suck," driving players back to classic mode.

The appearance of Bejeweled Twist in 2008 provided the first evidence that some fans of the franchise wanted the game to stay true to its roots. In Twist, matches are made by rotating groups of gems, not swapping them. Kapalka says it "turned off a lot of people." The problem was that the rotational mechanic was a "fairly radical change." While some players liked the new dynamic, those who expected to be moving gems left, right, up and down were upset. Some felt that they had been tricked and betrayed.

Much like reinventing the wheel, redesigning and updating Bejeweled is harder than it sounds, and there's no guarantee that what you create will be better than you started with. You can read more about it Kyllo's article, "The Jewel in PopCap's Crown."