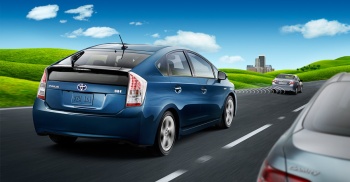 James Cameron feels strongly about the environment, and told the world as much in 2009's Avatar. He also wants to encourage his Avatar cast to drive environmentally-friendly, and has gifted hybrid Prius cars in bright Na'vi blue to 11 of the film's stars. There's no word as to whether any of the crew members on the multi-billion dollar grossing film have received a car.

Deadline quoted the director as saying, "It's not that the movie converted people - it resonated with something that was already there, to find something inside for people and gave people a way to think about this. And if that manifests in people cutting down on their energy usage or recycle or buy a Prius...the challenge for me is to try to help people figure out what to do with that feeling that they're feeling. I do think that part of my job - to show them what to do." Where would we be without Cameron to show us the way?

No word on which of the cast were recipients, but Avatar starred Sam Worthington (Terminator Salvation), Zoe Saldana (Star Trek), Sigourney Weaver (Alien), Stephen Lang (The Men Who Stare At Goats), Michelle Rodriguez (Lost), and Giovanni Ribsi (Cold Mountain), so I'm going to guess they were beneficiaries of Cameron's generosity.

No Right Explanation: You've Got a Friend In Me Firefilm 4 Comments
Comments on