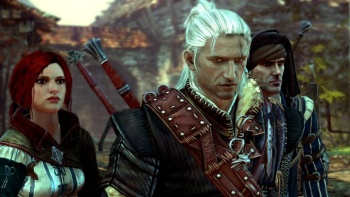 CD Projekt Red has something special in store for seriously hardcore RPG fans: an "insane" difficulty level in The Witcher 2: Assassins of Kings that will destroy your saved games if you die.

So you think you're bad. You're a tough guy. You're hardcore. Let's see you try this, then: play a sprawling, unforgiving, combat-heavy RPG at the hardest difficulty level possible, and if you die, you die - permanently. No reloads, no do-overs; if you die in the final battle, you start over again from square one. That, in a nutshell, is the "insane" mode of The Witcher 2.

"You can save the game, but when you die the saves are disabled," Witcher 2 Lead Gameplay Designer Mateusz Kanik told Eurogamer. "Of course we plan to have a resurrection scroll, maybe DLC or something. You'll see."

The insane setting was apparently inspired by the notoriously difficult Demon's Souls, which the studio reportedly "admires greatly," and along with permanent death it will also feature a few changes to enemy behavior that will make an untimely demise much more difficult to avoid.

"It won't be easy to not fight the monsters. We fixed that by giving all opponents special abilities which allow them to catch the Witcher," Kanik said. "Undead can dig into the ground and get up near the player. So when you run he will dig up in front of you and grab you. It will be harder to just run and avoid the fight."

And what's the big payoff for struggling through an ultra-hard, no-death Witcher 2? "There will be an achievement for that, for sure," Kanik added.

Likely to be of greater interest to the not-quite-so-self-flagellating Witcher fan demographic will be the ability to import saves from the original game, which will have an impact on certain story details and allow Geralt to bring along some of his equipment as well.

"We want to import information about your decisions in The Witcher 1, and to make consequences of those decisions in The Witcher 2 so it will impact the storyline. Of course, not a new story, totally. Only little differences," Kanik explained. "We want to give the possibility to import some items from your inventory. Of course, not all because it impacts the game balance. Money, for example, we can't give, because the game economy will be ruined. But for sure there will be an option to import some weapons and armor."

For players who don't have a copy of their Witcher saved games lying around (come on, it's only three years old), the studio is also considering a "PS3 Mass Effect 2-style story generator" which will allow them to shape the game world in a similar fashion.