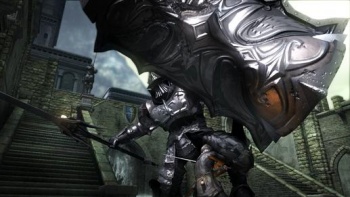 The murderously difficult Demon's Souls will continue mercilessly slaughtering players for a little while longer yet.

2009's Demon's Souls was the very definition of "bizarre cult hit," a horrendously hard action game that took great delight in killing players over and over again - but gamers loved it. One of the most interesting things about Demon's Souls was its pseudo-online component: While you couldn't adventure cooperatively with other players, you could leave them messages warning about dangers ahead ("Trap around corner") or even come into their game as phantoms to try and kill them.

Of course, these pseudo-online features require publisher Atlus to keep its servers up and running at its own cost. While Atlus had previously pledged to keep Demon's Souls running online until at least March 2011, the ferocity of the community has persuaded the publisher to keep the servers whirring until October, thanks to the game's popularity.

"We've said it before and we'll say it again," said Atlus big-shot Aram Jabbari, "we will support the online servers for Demon's Souls as long as we possibly can, and we'll be as transparent about the entire process as possible, hence us constantly updating folks as to what to expect."

"That said, we're starting to think ... the servers may have taken on a bit of a ... life of their own," said Jabbari. "Have you played the game? It's not just one of the most brilliant roleplaying games ever made; it's darn challenging, too. It's starting to feel like even if we wanted to, we couldn't shut things down."

"Honestly, we're more worried the servers will shut us down than the other way around."

I'm not quite sure what he means by that, to be honest - but have you considered giving the community the option to host servers themselves, Mr. Jabbari? That way, Demon's Souls players get to play the game the way they love, and you don't have to bear the upkeep costs for an online game with no further income. It's a win/win situation.